You are using an outdated browser. Please upgrade your browser to improve your experience.
by Brent Dirks
January 10, 2014
Movie theater chain Alamo Drafthouse really doesn’t want you using a phone while watching a flick. The Austin, Texas-based company made headlines in 2011 when it released a commercial featuring an actual customer who left a nasty voicemail regarding the policy. And the awesome chain has outdone itself for the release of Spike Jonze’s film “Her” which sees the main character fall in love with a Siri-like artificial intelligence inside his phone. To celebrate, Alamo reached out to the real-life human behind Siri’s original voice, Susan Bennett, to record one of its hysterical “No Talking, No Texting” PSAs that will appear before each screening of “Her” at every theater location in the chain. Here’s the video. Click here if you can’t see it. That’s pretty damn funny and definitely gets the point across. In 2013, Bennett was finally revealed as the original voice of Siri, which debuted with the iPhone 4S in 2011. Even though she recorded her lines for ScanSoft back in 2005, Bennett instantly pegged Siri’s voice as her own. But as you know, starting with iOS 7, Siri has a different female voice. Even so, I’ve got to hand it to Alamo for going all out with making sure theater goers understand its simple message. I love being a customer, and it's my absolute favorite place to watch a movie away from home. 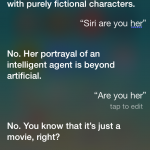 Siri Wants Nothing To Do With Scarlett Johansson's Samantha In 'Her' 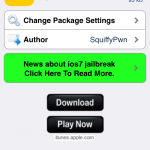