You are using an outdated browser. Please upgrade your browser to improve your experience.
by Bryan M. Wolfe
January 22, 2014
Today is the 30th anniversary of Apple’s iconic Macintosh ad, “1984.” The 60-second tour de force aired only once on national television. That was during the third quarter of Super Bowl XVIII on Jan. 22, 1984. A 30-second version aired across 11 U.S. markets in the weeks that followed. Directed by Ridley Scott, “1984” actually debuted during the final minutes of 1983 in Twin Falls, Idaho. As we noted earlier this month, the team over at Chiat/Day (now TBWA\Chiat\Day) wanted the ad to qualify for the 1983 advertising awards. Here is “1984” as it originally aired: http://www.youtube.com/watch?feature=player_embedded&v=g_d5R6Il0II In 2004, Apple unveiled a 20th anniversary remastered version of “1984.” As TUAW first noted, ”The video is notable insofar as the runner in the revamped commercial is wearing an iPod. Perhaps for the 30th anniversary of the Mac, the woman won’t be running at all, but rather walking slowly, head down, and fully engrossed in a game of Angry Birds on her iPhone 6.” Take a look: http://www.youtube.com/watch?feature=player_embedded&v=5JreOhjCJA0 Happy Anniversary, "1984." 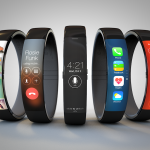 The Best Apple 'iWatch' Concept Released To Date?
Nothing found :(
Try something else