You are using an outdated browser. Please upgrade your browser to improve your experience.
by Bryan M. Wolfe
January 17, 2014
The long-rumored “iPad Pro” could be arriving in stores before the end of September. “Market sources indicated that Apple is likely to release a 12.9-inch model by the end of the third quarter at the earliest,” according to Digitimes. A third quarter launch would mean the iPad Pro would be unveiled between July and September. For the past two years, Apple has announced new iPhones in September, followed by new iPads in October. Last fall, for example, Apple unveiled the iPhone 5s and iPhone 5c on Sept. 10. The iPad Air and iPad mini with Retina display were announced on Oct. 22. In 2012, the iPhone 5 was announced on Sept. 12. Apple revealed the iPad with Retina display and iPad mini on Oct. 23. The publication notes that Apple and Samsung will remain the global top-two tablet providers in 2014. They will account for “expected shipments of 80-90 million and 60-70 million units, respectively.” Earlier this week, DisplaySearch reported that Apple’s larger iPad would likely feature a 12.9-inch display with a resolution of 2732 x 2048 and 265 PPI. On Jan. 3, Evercore Partners analyst Patrick Wang said the iPad Pro could feature a next-generation “A8” processor, and launch in the fall of 2014. Wang called the 64-bit infrastructure introduced in Apple’s A7 processor a “game changer,” and one of the reasons Apple can now produce a hybrid iPad. At last week's International CES, Samsung officially unveiled two new tablets: the Galaxy Note Pro 12.2, and Galaxy Tab Pro 12.2. Both 12-inch tablets feature a 2560 x 1600 pixel, “super clear” display. The Wi-Fi and 3G models include a Samsung Exynos 5 Octa processor, while the LTE models come with the Snapdragon 800 from Qualcomm. Each comes with 3GB of RAM, and either 32GB or 64GB of built-in storage. Are you planning to buy an iPad Pro? Photos: iPad Pro concept by MacRumors 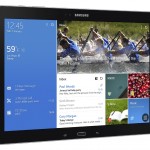