You are using an outdated browser. Please upgrade your browser to improve your experience.
by Bryan M. Wolfe
January 27, 2014
Google’s Android was the big winner in terms of market share in 2013 as it easily topped competitors in key markets to end the year. A new survey from Kantar Worldpanel ComTech, however, did have some good news for Apple’s iOS. From October through December, Android topped iOS in Europe, 68.6 percent to 18.5 percent. Windows Phone accounted for 10.3 percent. The largest markets in Europe are the United Kingdom, Germany, France, Italy, and Spain. In the United States, Android’s lead over iOS was much smaller, 50.6 percent to 43.9 percent. In China, Apple’s share was 19 percent versus 78.6 percent for Android. In total, Android saw year-over-year share growth across 12 major global markets. Apple lost market share in most countries. Kantar notes, however, that Apple “held strong shares in key markets” including the United States, Great Britain, and China. 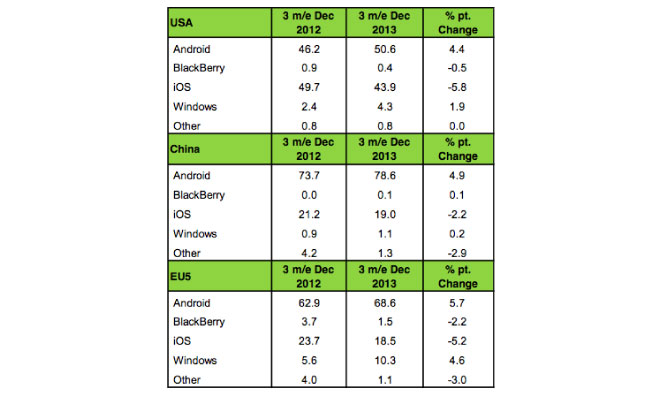 One place where iOS continues to lead is in Japan, with 68.7 percent. It also was No. 1 at all three of Japan’s major wireless carriers, including NTT DoCoMo, SoftBank, and AU’s KDDI. Apple's iOS has traditionally trailed Google's Android in terms of market share. Profit-wise, Apple typically makes more than Android-based competitors. Cupertino will announce its first quarter financials later today, Jan. 27. See also: Developers Are Still Making The Most Money In The App Store Versus The Google Play Store, Apple Tops A New Survey Of The Best Smartphones, Tablets And Laptops Of The Past Year, and Phil Schiller Links To Report Showing 99 Percent Of Mobile Malware In 2013 Was On Android. 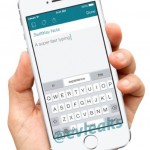 SwiftKey Virtual Keyboard To Launch For iOS In A Dedicated App

Phil Schiller Links To Report Showing 99 Percent Of Mobile Malware In 2013 Was On Android
Nothing found :(
Try something else