You are using an outdated browser. Please upgrade your browser to improve your experience.
by Brent Dirks
February 20, 2014
Logging on to the free Wi-Fi connection at your local Starbucks could soon be a lot easier – thanks to Google. According to Engadget, the search giant is testing an iOS and Android app that allows users to automatically authenticate and connect to the hotspot inside the coffee shops. The app would also work with other private hotspots. While the report says that the app may never be released, Google apparently wants to replace the AT&T-powered Wi-Fi in more than 7,000 Starbucks locations across the United States. As you probably know, logging on at Starbucks is a multi-step process. Users need to find the wireless hotspot with their device, open a browser, and then agree to the terms and conditions. But thanks to more encrypted access points, Wi-Fi access could be automatic with Google at the helm. The report says Google could also deepen existing partnerships:

Google may also expand its partnership with Boingo, extending logins to locations where it's footing the bill for free wireless. The app could utilize a user's Google account and install a dedicated security certificate on their device to automatically authenticate devices when a connection is available.

While it doesn't exactly bother me to jump through a few hoops at Starbucks, I'm all for an app that would make it a seamless process. For other news today, see: Apple's Deal With China Mobile Is Already Bearing Fruit, T-Mobile's Latest Deal Is Good News For Users But Still A Slap In The Face For BlackBerry, and Apple Veteran: Making Plastic Part Of The Strategy Is What Doomed The iPhone 5c. 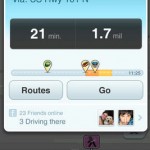