I think this valuation gap is, frankly, absurd and worth exploiting. I'm starting to believe that Google has run far ahead of itself and - despite how much I absolutely adore Google - think that the pair trade here is probably to short Google/buy Apple until Apple's enterprise value is, once again, squarely ahead of Google’s.

This may be true, but try telling that to Wall Street. Year over year, Google shares are up nearly 53 percent. Apple’s share are up "just" 14.6 percent, by comparison. On Thursday, Apple released its seventh dividend of the Tim Cook era. Payable on Feb. 13, the dividend works out to $3.05 per share. It was declared on Jan. 27. See also: Schiller, Possibly Forstall Expected To Testify In Apple-Samsung Patent Case, The Contents Of The 'Steve Jobs Time Capsule' To Be Uncovered Feb. 25, and Former Designer Sheds Light On The Dark Side Of Working At Apple. Photo: Dual Sub 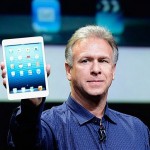