You are using an outdated browser. Please upgrade your browser to improve your experience.
by Bryan M. Wolfe
April 3, 2014
Apple’s annual Worldwide Developers Conference (WWDC) kicks off on Monday, June 2, the company has announced. Unlike in past years, tickets will be assigned randomly to developers on April 7. Events scheduled for WWDC 2014 include: Philip Schiller, Apple’s senior vice president of Worldwide Marketing notes:

We have the most amazing developer community in the world and have a great week planned for them. Every year the WWDC audience becomes more diverse, with developers from almost every discipline you can imagine and coming from every corner of the globe. We look forward to sharing with them our latest advances in iOS and OS X so they can create the next generation of great apps. 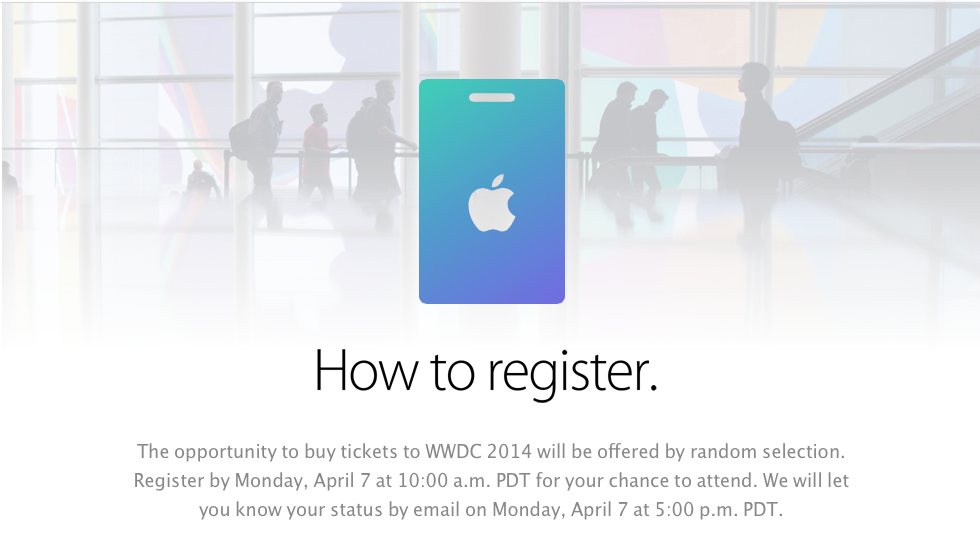 Developers can apply for tickets via the WWDC website (developer.apple.com/wwdc) now through Monday, April 7 at 10:00 a.m. PDT, and tickets will be issued to attendees through random selection. Developers will know their status by Monday, April 7 at 5:00 p.m. PDT. There will also be 200 Student Scholarships available, giving students around the world the chance to earn a free ticket (developer.apple.com/wwdc/students).

Once again, tickets to this event are $1,599. WWDC 2014 is likely to feature a demo of iOS 8 and the successor to OS X Mavericks. We might also see the launch of new MacBooks, and Apple’s recently rumored iTunes Radio subscription service. What we probably won’t see in June are new iOS devices, including the “iPhone 6” and “iWatch.” Past practice suggests Apple won’t reveal these products until fall.
Nothing found :(
Try something else