You are using an outdated browser. Please upgrade your browser to improve your experience.
by Joe White
April 13, 2014

Ryan Petrich (@rpetrich) has updated a prerelease version of his Activator package adding support for custom battery level triggers. You can download the beta software free of charge on the Cydia Store now, and it’s optimized for the iPhone, iPad, and iPod touch.

Once you’re running the updated Activator beta package, you’ll be able to set custom actions when your iPhone or iPad’s battery life level rises above or drops below a certain percentage. These can be set using simple slider toggles from inside of the Activator app, and jailbreakers can have multiple battery-related triggers running alongside one another.

The options, “Battery Charges” and “Battery Drains,” can be added from Activator’s Custom Events menu.

Because the software is running in beta, the updated Activator could prove unpredictable for users. Though it’s worth noting that I’ve been running the prerelease software on an iPhone 5s for some time, and so far I haven’t encountered a problem with it.

In order to try Activator beta out for yourself, you’ll need to have added Petrich’s repository to your Cydia app. You can do this using the “Sources” tab, and the repository’s address is: http://rpetri.ch/repo.

As mentioned, the updated Activator beta package is available to download on the Cydia Store now. You can pick it up free of charge, and Activator is optimized for the iPhone, iPad, and iPod touch. 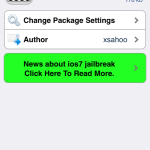 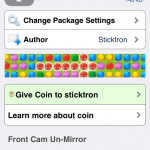 This Jailbreak Tweak 'Un-Mirrors' The iPhone's Front-Facing Camera
Nothing found :(
Try something else