You are using an outdated browser. Please upgrade your browser to improve your experience.
by Bryan M. Wolfe
April 16, 2014
For the second time in five days, images have leaked purportedly showing an “iPhone 6” case in the wild. Once again, the images suggest Apple is moving the sleep/wake button on the device from the top to the upper right side. As the images from nowhereelse.fr show, the lock button is now located across from the volume up button. The mute switch and volume controls, meanwhile, remain in the same position. The case also suggests Apple is moving away from the circular volume control buttons found on the iPhone 5s, iPhone 5, iPhone 4s, and iPhone 4. Instead, it looks like the next iPhone could come with pill shaped volume control buttons. This type of button is found on the iPhone 5c, and was also present on the iPhone 3GS, iPhone 4G, and first-generation iPhone.

Last week, MobileFun published images purportedly showing a transparent case for the iPhone 6. Those images showed a cutout on the side of the phone, opposite the volume controls. Both of these leaks seem to confirm an earlier report that said Apple plans to move the iPhone’s power button from the top of the device to the side. We will almost certainly see more of these types of images in the weeks and months ahead. When we do, we’ll let you know. See also: Mockups Of Apple's iPhone 6 Make An Appearance At The Hong Kong Electronics Fair, and Have Images Of The First Amazon Smartphone Leaked? 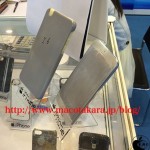 Mockups Of Apple's iPhone 6 Make An Appearance At The Hong Kong Electronics Fair
Nothing found :(
Try something else