Mockups and case designs for the iPhone 6 have recently made an appearance at the Hong Kong Electronics Fair, providing iOS device owners with even more of an idea of how Apple’s next-generation iPhone handset might look. It should come as no surprise that the mockups exhibited show off a larger, thinner smartphone featuring the usual array of buttons, ports, and camera modules.

One particular difference concerns the handset’s power button, however. As previous reports have indeed suggested, the iPhone 6 seems to feature a sleep button that’s been relocated to its side. Furthermore, as per previous renderings, the smartphone’s flash module is indeed circular, rather than oblong-shaped.

Here’s a selection of the images along with a video of the mockups and cases, all of which were first published by Macotakara:

More and more pictures claiming to show part or all of Apple’s iPhone 6 are sure to appear as we edge closer to fall. Most recently, we got to take a look at the handset’s purported front panel, and also at the batteries set to be used in the next-generation smartphone.

Apple’s iPhone 6 isn’t the only handset under scrutiny, however. Images of Amazon’s long anticipated first smartphone also surfaced online ahead of schedule yesterday, though the handset pictured was covered by a protective shell which masked its actual design.

We should see Apple announce its iPhone 6 in September or October, and until then our coverage of the handset can help you keep up to date with the latest reports and rumors.

In the meantime, see: Sometimes You Die Will Make You Rethink Your Expectations And Reality, Google Unveils The Official iPhone App For Its Helpouts Service, and Master A Lifeless Automaton In The Challenging Platformer Wind-up Knight 2. 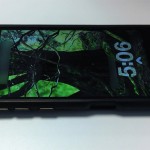 Have Images Of The First Amazon Smartphone Leaked?
Nothing found :(
Try something else