Auxo 2, the popular jailbreak tweak from A3 Tweaks (@a3tweaks), has received an update adding support for Apple’s iPad. Rather than releasing a new iPad-only application, the developer has fortunately chosen to add universal support to the package, meaning owners of Auxo 2 aren’t going to have to pay extra in order to enjoy the jailbreak tweak on their tablet.

You can download Auxo 2 version 1.1 now on the Cydia Store; it’ll be available from within the “Changes” section of the Cydia application. In terms of features, Auxo 2 running on the iPad is much the same as it is when running on the iPhone or iPod touch. As we explained in our previous article:

First, there’s the so-called “Multi-Center,” a multitasking interface that users can activate by swiping up from the bottom of their iPhone’s screen. Here, you can access app pages, music controls, brightness controls, and a handful of Control Center icons. You can also pull down on app pages in order to take a closer look, and tapping on one page opens that particular app.

Second, “Quick Switcher” is like CMD + Tab for iOS: it allows users to perform a lesser slide-up gesture in order to quickly navigate between open iOS apps. It’s simple and smart, and works well.

Third and finally, “Hot Corners” allow jailbreakers to swipe from one of the bottom corners of their iPhone’s screen in order to reveal a more concentrated multitasking interface (one that merely includes app pages and icons, rather than the whole shebang as with the aforementioned Multi-Center).

This three-part feature set makes Auxo 2 one of the most impressive packages available on the Cydia Store, and as such we’re pleased to see it launch for Apple’s iPad so soon after its initial release.

In case you’ve yet to take Auxo 2 for a spin, here’s a video outlining the jailbreak tweak’s key features:

As mentioned, if you already purchased Auxo 2 then the updated package can be downloaded now free of charge. If you’re new to Auxo 2, it can be purchased for $3.99; those who own the first Auxo package can pick up the sequel for a discounted price. 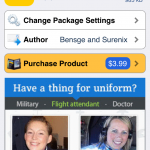 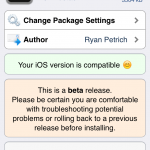