You are using an outdated browser. Please upgrade your browser to improve your experience.
by Brent Dirks
April 16, 2014
In a recently released email, a Samsung executive believed the death of Apple co-founder and former CEO Steve Jobs’ was the perfect time to attack the iPhone. The email, from Samsung’s Vice President of Sales Operations Michael Pennington, was revealed during the ongoing patent battle between Apple and Samsung. CNET first reported on the exchange. From a thread dated Oct. 7, 2011, two days after Jobs passed away. Here are Pennington’s thoughts:

"Unfortunately, Steve Job's [sic] passing has led to a huge wave of press coverage of Apple's and iPhone's 'superiority,' all created by the 'passionate, tireless, perfectionist...' The point here is that there is an unintended benefit for Apple, since the external messages by 3rd parties are all highlighting and/or supporting the consumer perception that Apple products are superior, since Jobs' [sic] was such a visionary and perfectionist. What consumer wouldn't feel great about purchasing a device developed by such a person. "Sorry to continue to push this issue, but I have seen this far too long and I know this is our best opportunity to attack iPhone. If there is no consensus on the approach I initially proposed, I will stop pushing, but I would like to better understand our strategy so I can align with that."

I’m all for going on the attack, but days after Jobs’ death is in bad taste. But as shown previously, Samsung’s top goal was to beat Apple, so it’s not all that surprising. In the most recent trial, which started in late March, Apple is requesting more than $2 billion in damages from Samsung because of patent infringement. For other trial coverage, see: Android Chief Claims Google Invented Key Features Before Apple, Apple Has Experts Explain Its $2.2 Billion Damages Claim Against Samsung, and Phil Schiller Testifies As Apple Seeks $2 Billion In Damages From Samsung. 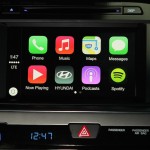 Apple CarPlay Technology Is Coming To The 2015 Hyundai Sonata

More Proof The Power Button On Apple’s ‘iPhone 6’ Is Moving
Nothing found :(
Try something else