You are using an outdated browser. Please upgrade your browser to improve your experience.
by Bryan M. Wolfe
May 8, 2014
Apple and Samsung continue to dominate the global smartphone market. During the previous quarter, the makers of the iPhone 5s and Galaxy S5 accounted for 106 percent of the global smartphone industry profits, according to new research from Canaccord Genuity, according to AppleInsider. From January through March 2014, Apple took 65 percent of the profits generated in the smartphone industry, while Samsung’s take was 41 percent. Every single other company either had a negative value share, or they were neutral. Losers included Nokia, BlackBerry, and Motorola, while LG, HTC, and Sony broke even. 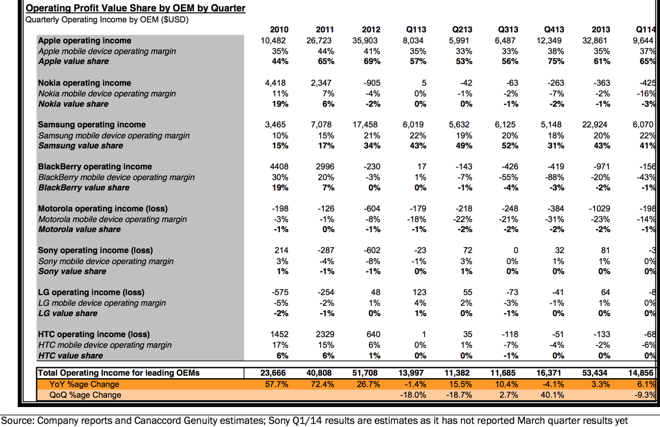 Last year at this time, Apple took 57 percent of the profits generated, while Samsung accounted for 43 percent. According to analyst Michael Walkley:

Given the current competitive dynamics, we believe Apple and Samsung will maintain dominant value share during 2014. With BlackBerry struggling and Microsoft purchasing dominant Windows Phone OEM Nokia, we believe Chinese OEMs with strong Android portfolios will likely emerge as stronger long-term competitors to Apple and Samsung.

To clarify, profit share is not the same as market share. This is why Apple and Samsung can take 100 percent of the profits even though other companies compete. See also: Samsung To Appeal Apple Smartphone Trial Verdict, Forget Samsung: Jury Foreman Suggests Apple Should Sue Google, Instead, and Samsung Executive Wanted To Attack The iPhone Shortly After Steve Jobs’ Death. Photo: AndroidCentral

Future Apple iPhones Could Create 'Super-Resolution' Photos
Nothing found :(
Try something else