When it comes to online sales, Apple’s performance appears to be rapidly improving. Because according to recent data from e-commerce research firm Internet Retailer, the Cupertino, California company has overtaken Staples to become the No. 2 online retailer, losing out on the No. 1 position to Amazon.

The news reached us from The Wall Street Journal, which explains:

The iPhone maker notched a 24% increase in online sales to $18.3 billion last year. Part of the increase in Apple’s sales this year came from Internet Retailer’s inclusion of Apple’s online hardware sales for the first time, in addition to the digital sales from its App Store and iTunes.

Staples, which Apple overtook to take second place, instead saw flat growth of just one percent over the last year. Indeed, Apple’s 24 percent increase in online sales is even more impressive than Amazon’s 20 percent increase, though surprisingly Wal-Mart beat Cupertino on this front with a huge sales increase of 30 percent for the same period.

Here’s a chart outlining the performance of Apple, Amazon, and others:

Today, Apple is expected to launch an iPhone initiative inside U.S. retail stores, rather than its online store, in an attempt to foster sales of its iPhone 5s and iPhone 5c. Customers eligible for an upgrade will be contacted by Cupertino and invited to call into their local Apple Retail Store; from here, upgrade options will be presented and customers will also have the chance to trade-in their old handset for a discount, too.

It’s clear Ahrendts is meeting with promising online sales from Apple, but her main challenge is expected to concern the company’s “brick-and-mortar” retail efforts. Maintaining a strong, physical retail presence in the age of online commerce will likely be a main focus of Ahrendts in 2014 and beyond, and it’s no surprise that in an attempt to do so, Cupertino is continuing to expand its retail presence worldwide.

See also: Apple Is Set To Open Its World Trade Center Apple Store In 2015, Modulo Is The Swiss Army Knife Of Portable Battery Packs For Your iOS Device, and There Is Both Good And Bad News For Paid Social Network App.net. 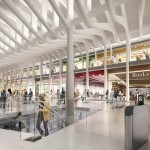