You are using an outdated browser. Please upgrade your browser to improve your experience.
by Joe White
June 13, 2014
It looks like at least one of Apple's upcoming retail stores in China will borrow from the popular glass entryway in place at Cupertino's Pudong, Shanghai venue. As ifoAppleStore explains, Apple is indeed planning on constructing a similar glass cylinder entryway at its in-development Chongqing store. In a report based on recently published renderings of the upcoming Chongqing Apple Retail Store (included below), ifoAppleStore explains:

Early renderings of the space showed two circular features at both ends of the plaza. However, in a later rendering, one of the features is covered with a cylinder of glass topped by a white Apple logo, identical to the Pudong Apple store design. Presumably, the cylinder is the entrance to the full store underground.

Take a look: Back in October last year, Apple was actually granted a patent for its Shanghai store's glass entryway. In the application, Cupertino explained how its designers and engineers "developed new techniques in order to ensure that the glass structure could withstand the elements, while also detailing how the glass panels were properly shaped and curved in order to fit with the Apple Retail Store’s design." The patent was originally filed in 2011, and cites David Andreini, Karl Backus, Jon F. Cooksey, Tim Eliassen, Scott David Hazard, Holger Krueger, Peter Lenk, James O’Callaghan, and Yutang Zhang as its inventors. Though we were surprised to see a patent surface for an Apple Retail Store, the move now makes more sense. It looks as if Cupertino's push to triple its retail presence in China could see more new stores featuring a similar glass entryway appear throughout the nation. [gallery] 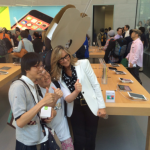 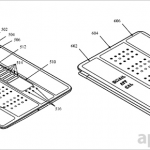