You are using an outdated browser. Please upgrade your browser to improve your experience.
by Joe White
June 5, 2014
Sprint's acquisition of T-Mobile could be completed sooner than we'd expected, according to a recent report from Bloomberg. The publication notes that Sprint "is nearing an agreement on the price, capital structure, and termination fee" of an acquisition of T-Mobile, the U.S. "uncarrier" which has disrupted the industry somewhat through its unconventional marketing strategies. The deal could see T-Mobile acquired at a value of almost $40 per share, placing the uncarrier's equity value at around $31 billion. Citing people familiar with the matter, Bloomberg notes:

Sprint will offer about 50 percent stock and 50 percent cash for T-Mobile, leaving Bonn-based parent Deutsche Telekom AG with about a 15 percent stake in the combined company, according to the people, who asked not to be identified because the process is private. The agreement could be announced as soon as July, the people said.

For U.S. iPhone owners, the deal would see the nation's third- and fourth-largest wireless carriers combine to become one single network, providing AT&T and Verizon with serious competition. Masayoshi Son, founder of the Japan-based SoftBank (which owns 80 percent of Sprint), "has been pitching the deal to skeptical regulators as beneficial to consumers in both wireless and Internet service," the report adds. To put the acquisition into perspective, Verizon presently has 120 million subscribers while AT&T holds 108 million. Sprint, on the other hand, has 54 million subscribers and T-Mobile has 45 million. As such, even if the two companies do join forces their combined subscriber base will still be smaller than those of both Verizon and AT&T. Previously, we heard that Sprint's acquisition of T-Mobile could be announced this summer. We'll keep you updated with further information as we receive it. In the meantime, see: Retina-Equipped iMac Referenced In OS X 10.10 Yosemite, This Joust In: Gameloft Releases Medieval Combat Game Rival Knights, and Zen Studios Adapts Telltale’s Walking Dead: The Game As Choice-Driven Pinball Table. 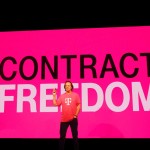 T-Mobile Confirms Support For iOS 8's Wi-Fi Calling Feature On iPhone
Nothing found :(
Try something else