You are using an outdated browser. Please upgrade your browser to improve your experience.
by Brent Dirks
July 24, 2014
A little earlier today, as expected, Apple opened up the Yosemite public beta program. But some users ran into a big issue. As we reported, some members received errors when attempting to verify the code sent from Apple. A message said “This code has already been redeemed.” But Apple, via 9to5Mac, has offered a fix to the problem. Users will need to refresh the redemption page when signed in so it will generate a new code. Apple says the new code should work when entered into the Mac App Store. If you’re still interested in joining the program, you can head on over to this link. The beta released to the public is the same version sent to developers earlier this week. While it might sound fun to download the beta version of OS X 10.10, make sure to be prepared before downloading the software and backup your Mac with Time Machine. Yosemite, which offers a major visual redesign of Mac OS X, should be released to the public sometime this fall. 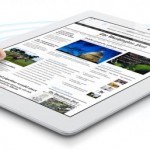 Apple's iPad share of the tablet market drops to 25.9 percent
Nothing found :(
Try something else