You are using an outdated browser. Please upgrade your browser to improve your experience.
by Bryan M. Wolfe
July 23, 2014
Apple is "tentatively" making plans for a mid-September "iPhone 6" keynote address. Besides introducing the next-generation iPhone, Apple is also likely to use the event to announce final details about iOS 8. This news comes from 9to5Mac and comes from "sources briefed on the plans." According to the report:

These people say that the second and third weeks of September are the mostly likely weeks for the event to be held, but they add that manufacturing uncertainties could alter the event’s timeframe. A decision has not been finalized, and sources made it clear that the plans are in flux.

This sounds about right, as the past two iPhone launch events were held in mid-September. The iPhone 5s and iPhone 5c were announced on Sept. 10, 2013. The iPhone 5 made its debut on Sept. 12, 2012. This doesn't mean Apple is about to confirm the iPhone 6 media event anytime soon. Last year, Apple didn't make the event announcement until Sept. 3. For more on the next iPhone, see: New shots of the 'iPhone 6' rear shell and flex cable appear online, Preorders for Apple's 'iPhone 6' are now being offered by online sellers in China, and Apple preparing up to 80 million 4.7-inch and 5.5-inch 'iPhone 6' units, says WSJ. 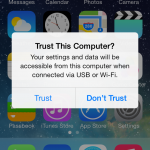 Apple explains iOS diagnostic capabilities in response to backdoor access allegations
Nothing found :(
Try something else