You are using an outdated browser. Please upgrade your browser to improve your experience.
by Brent Dirks
July 22, 2014
As we inch closer to the rumored release date of the next-generation iPhone, more images of parts continue to appear online. The newest leaks, first posted by Apple.club.tw, apparently show the rear shell and flex cable of the 4.7-inch “iPhone 6.” The rear shell looks extremely similar to previous leaks, showing an embedded Apple logo and the usual antenna breaks. As we reported yesterday, a new report says the logo might light up when a new email, SMS, message, or update arrives. But more than likely, the logo will just look similar to the version found on an iPad. Another new image shows the apparent Lightning and headphone flex cable from the bottom of the handset. It is slightly different than the same part found in the iPhone 5s. Currently, rumors say both a 4.7-inch and 5.5-inch version of the new handset will be produced. While we’ve seen a number of parts from the smaller version, images from the phablet have been non-existent. Even so, The Wall Street Journal recently said that Apple is planning to manufacture between 70 to 80 million units of both handsets combined by the end of the year. The handset is expected to offer a faster A8 processor, improved camera, a sapphire display, and more. For other recent news today, see: Kobe Bryant explains his recent visit to Apple headquarters, Numbers to consider ahead of Apple’s third quarter FY2014 earnings call, and Siri might be improving, but Googe Now on Android is still more accurate. Via: MacRumors 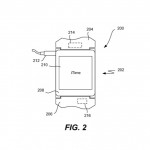