Apart from iOS 7.1.x support, the updated Springtomize 3 also brings dark folders to the table, allowing users to black out the background of iOS app folders on their iOS device. Of course, this is just one of a huge number of customization options which are available in Springtomize 3. As we explained in a previous article addressing the package:

It’s definitely a smart package, and one jailbreakers should clearly consider taking for a spin. Besides the aforementioned changes, a large number of bug fixes have also been applied in the updated app, meaning Springtomize 3 should now be more stable than ever.

You can pick up Springtomize 3 on the Cydia Store for $2.99, though this most recent update can be downloaded and installed free of charge for owners of the package.

Check out the updated jailbreak tweak, or see: A Bad Day For Samsung As Profits Decline Once Again, Gameloft’s Modern Combat 5 Will Still Be An Online-Only Title, and Should You Upgrade To Apple’s iOS 8 Beta 3 Or OS X Yosemite Developer Preview 3?. 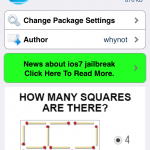 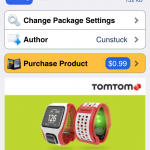 Cydia Tweak: Aslock Adds 2 Useful Gestures To The iOS Spotlight Interface
Nothing found :(
Try something else