You are using an outdated browser. Please upgrade your browser to improve your experience.
by Aldrin Calimlim
July 5, 2014
Q*bert, the famous isometric platform arcade game first released by Gottlieb in 1982, is set to make a comeback this year on iOS and other popular gaming platforms. The iconic large-nosed arcade game character is starring in a new game called Q*bert Rebooted. According to Polygon, Q*bert Rebooted offers the original Q*bert gaming experience in all of its pixelated glory and a modern remake featuring 3-D graphics:

Q*bert Rebooted players will be able to play in two modes, Q*bert Classic and Q*bert Rebooted. The former will consist of the original 2D gameplay on an isometric pyramid of colored cubes. The latter uses a playing field composed of hexagons, as you can see in the screenshot above, and features new playable characters, enemies, power-ups, traps and more.

What's more, as noted in its official website, Q*bert Rebooted features various variants of the title character, including Q*zilla and Q*nicorn, and new enemies in addition to Coily and the gang. Q*bert Rebooted is scheduled to be launched on Tuesday, July 8, on Mac, Windows, and Linux for $4.99 through Steam. It's expected to be released on iOS and Android soon after. Q*bert Rebooted is developed by Gonzo Games and Sideline Amusements under license from Sony Pictures Entertainment. This is by no means Q*bert's first foray into the world of iOS gaming. Sony Pictures Entertainment previously released the now defunct Q*bert Deluxe, which also featured an old-school mode and a modern one. 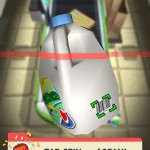 Fun Runs In The Family: Play Colorful Mini-Games In Bulkypix's Crumpets
Nothing found :(
Try something else