Apple and IBM announced a significant partnership recently. Now, however, Tim Cook has outlined the news in a new staff memo sent out to Cupertino’s employees.

As we explained earlier, Apple and IBM are taking on the enterprise sector together through developing “a new class of more than 100 industry-specific enterprise solutions,” optimizing IBM services for iOS, offering an enhanced AppleCare solution for enterprise, and launching new packaged offerings from IBM “for device activation, supply, and management.”

IBM will also be selling Apple’s iPhones and iPads to customers in enterprise.

Cook’s memo (via 9to5mac) reiterates aspects of the news and elaborates further in certain places. We’ve included the full text below for you to read through:

Today, we announced a groundbreaking new partnership with IBM that will enable enterprises to put the power of big data analytics at their employees‘ fingertips on their iOS device. This exclusive global partnership brings together Apple‘s legendary ease-of-use and integrated hardware and software with IBM’s unmatched industry depth, enterprise software and expertise in big data analytics.

It also builds on the incredible momentum in Apple’s enterprise business. iPhone and iPad can be found in 98% of the Fortune 500. People love to use iOS devices and Apple delivers the things companies need most—security and scalable deployment along with a powerful platform for apps. With this announcement, we’re now putting IBM‘s renowned big data analytics at iOS users‘ fingertips, which opens up a large market opportunity for Apple. This is a radical step for enterprise and something only Apple and IBM can deliver.

IBM is known for helping customers leverage big data and analytics to make their businesses run better. With over 100,000 consultants and sales professionals, they also have massive scale and global reach. IBM‘s sales and consulting teams will also be selling iPad, iPhone and AppleCare for Enterprise as part of the partnership.

This partnership brings together the best of both companies. It’s great news for Apple, IBM and for enterprise customers worldwide and I’m really excited to see it take off.

We’re excited to learn more about the service, though for now, further details are scarce. As usual, we’ll keep you updated with more information as we receive it.

For a recap of the news, call by Apple’s “iPad in Business” Web page. 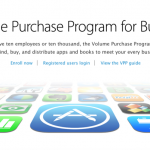 Apple is bringing its Volume Purchase Program for apps, iBooks to 16 new countries
Nothing found :(
Try something else