In the images, the back cover of the 5.5-inch model of the so-called “iPhone 6″ is compared with that of the smartphone’s 4.7-inch version. According to Evasi0n Jailbreak (via 9to5Mac), these images come from “deep within Apple’s supply chain in China” and the components shown are likely for testing purposes only.

Be that as it may, the 5.5-inch iPhone 6′s rear shell appears to be a close match to the 4.7-inch model’s, which has been depicted in a number of leaks since as early as well over two months ago. 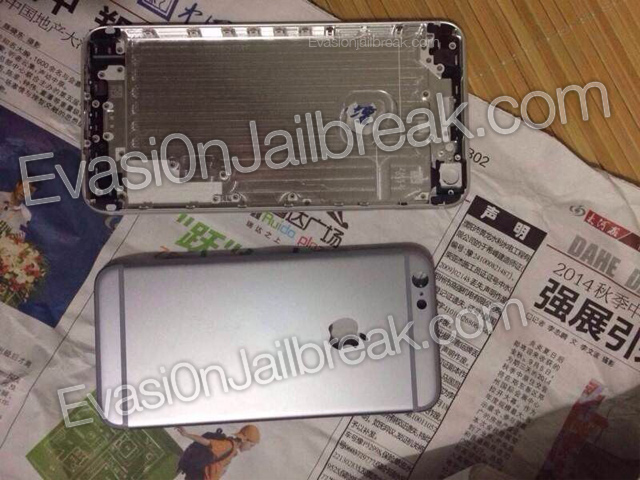 The purported rear shell of the 5.5-inch iPhone 6 with that of the 4.7-inch model

While there have been numerous leaks for the 4.7-inch model, dispatches from the supply chain for the 5.5-inch model have been few and far between, presumably because of the later production schedule of the larger version.

Apple is rumored to hold a special media event on Sept. 9 to unveil both versions of the iPhone 6, although the 5.5-inch model is expected to officially hit the market later than its 4.7-inch counterpart.

See also: Apple could sell a record number of “iPhone 6″ units during the first weekend, A protruding camera lens on Apple’s 4.7-inch “iPhone 6″?, and New claim states the “iPhone 6″ screen will have a resolution of 1,704 by 960 pixels.