Maybe John Gruber really was right all along. A new report from Re/Code says that Apple will indeed unveil a wearable device along with the next-generation iPhone at a special media event on Tuesday, Sept. 9.

The new device will, predictably, make good use of Apple’s HealthKit health and fitness platform. It will also — predictably — make good use of HomeKit, the company’s new framework for controlling connected devices — though it’s not clear how broadly or in what way.

While the HealthKit integration has long been suspected, the HomeKit information is a new twist. Whole-house control from a smart watch sounds like an exciting selling point.

Re/Code has a very strong track record with Apple rumors, so I would say that this latest news is almost a certainty. That’s definitely exciting.

But buyers ready to purchase the wearable might have to be patient.  A lack of product leaks suggest that it could be months before the device is ready for sale. That’s not unprecedented for Apple. The Mac Pro was introduced in June 2013, but didn’t begin shipping until December. And as you probably remember, the original iPhone was announced in early January 2007, but wasn’t available to consumers until June of that year.

The “iPhone 6″ is a different story. Apple is expected to announce two versions of the handset at the event. One will feature a 4.7-inch screen while the other while offer a 5.5-inch screen. The smaller handset should hit the market within 10 days after the introduction. It could be up to a month before the larger iPhone will be available to purchase.

We’re less than two week before the event, and it’s definitely shaping up to be huge for Apple. 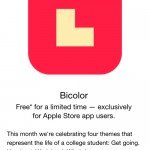 Wind down with Bicolor, which can be downloaded now for free via the Apple Store app 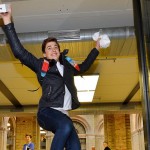 Our annual iPhone trade-in guide, ‘iPhone 6’ release date and more
Nothing found :(
Try something else