You are using an outdated browser. Please upgrade your browser to improve your experience.
by Brent Dirks
August 4, 2014
Even though the Federal Aviation Administration has relaxed the rules for portable electronics in-flight, don’t expect to be making cell phone calls in the air anytime soon. According to a new report from The Wall Street Journal, the Department of Transportation is leading the effort to create a formal ban of the practice. Here’s more from the story:

A spokeswoman confirmed that the DOT is developing "a notice of proposed rulemaking" for publication in December. "At this point, there is no final determination" as to what the notice or the final rule will say, said another spokeswoman. Regulators are focused primarily on the disruptive effects of voice calls rather than texting or other data use, having last year loosened restrictions that now allow airline passengers to use electronic devices for these purposes from gate to gate.

An official ban is needed because in late 2013 the Federal Communications Commission proposed to overturn the technical reasons that currently ban cell phone calls in the air. For their part, the carriers want to make their own rules deciding whether passengers can make calls during a flight:

"Airlines aren't clamoring to allow mobile-phone use during flight, and some have already said they'd prohibit it on their own flights," said Jeffrey Shane, general counsel for the International Air Transport Association, and a former senior Transportation Department policy maker. But Mr. Shane said some carriers may want to explore passenger-friendly ways to introduce calls, such as in-flight phone booths or quiet zones.

Is there anyone who thinks allowing cell phone calls on a flight is a good idea? Traveling is already stressful enough without having to hear the personal conversations of everyone else sitting in coach. For other news today, see: The Apple TV UI receives an iOS 7-like revamp in new beta software, Apple's iOS 8 beta 5 contains a number of notable changes, and Op-Ed: 3 ways to jumpstart Apple iPad sales. 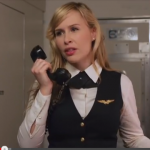 The FAA Finally Relaxes The Rules On Portable Devices In Flight 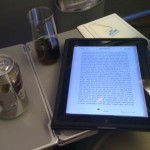 FAA Inching Closer To Allowing iPads, But Not iPhones, During Takeoff And Landing
Nothing found :(
Try something else