Apple is expected to unveil the company’s new iPhone lineup in two weeks, on Sept. 9. Now we’ve received an indication that the 32 GB iPhone 5c probably won’t be around after that date. The high-capacity handset is now “retired” at Verizon, according to AppleInsider.

Relying on an anonymous tip, the report notes that “the company plans to sell its remaining inventory and then will not replenish ahead of the anticipated Sept. 9 unveiling of Apple’s fall 2014 iPhone lineup.”

Validating this tip is the Verizon online store, which currently lists the 32 GB handset as sold out in all colors except blue. The 16 GB remains fully stocked, as well as all versions of the iPhone 5s. 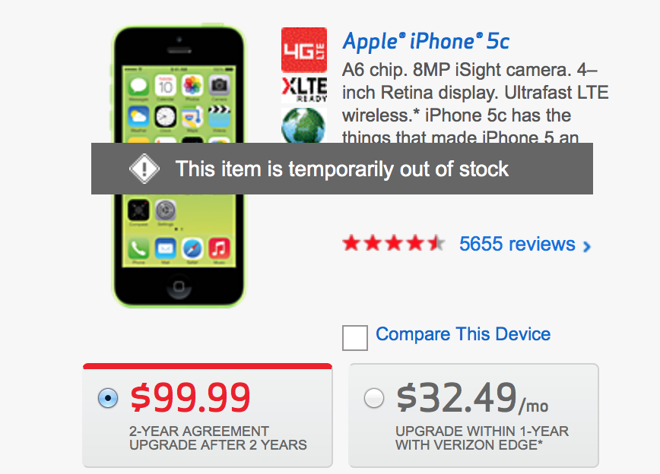 Apple is expected to announce a 4.7-inch and 5.5-inch “iPhone 6″ very soon. They are also likely to retire the iPhone 4s.

One 2013 iPhone model is probably going to be carried over to the new year. Based on today’s news, that model could be the 16 GB iPhone 5c. Apple could also elect to keep the 16 GB iPhone 5s around for another year.

For more information, see: Apple’s ‘iPhone 6′ may feature a 128 GB model, and Could Apple introduce a new USB power adapter with its bigger ‘iPhone 6′ handset?

Apple requiring developers to use newer beta versions of iOS 8 and OS X Yosemite
Nothing found :(
Try something else