At least one feature in iOS 8 won’t arrive when the software is released to the public next Wednesday, Sept. 17. First spotted by iLounge, the iOS 8 page on Apple’s site says that SMS Continuity will land in October.

More than likely, Apple will activate the feature when OS X Yosemite is released publicly, which is expected to be sometime late next month.

SMS Continuity allow users to send and receive SMS and MMS messages from their Mac or iPad. A conversation can even be started from Mac or iPad by selecting a phone number in Safari, Contacts, or Calendar.

The feature worked reasonably well in earlier versions of both OS X Yosemite and the beta editions of iOS 8. But it was apparently disabled in the GM version of iOS 8, which arrived for developers on Tuesday.

After Tuesday’s special event, which officially introduced both the iPhone 6 and the Apple Watch, Apple is expected to have another event in October. The company, along with announcing release plans for Yosemite, will reportedly unveil new models of the iPad Air and iPad mini with Retina Display.

While I’m disappointed that the feature has been removed from the final iOS 8 version, it shouldn’t come as a huge surprise that Apple is choosing to wait until both software versions are ready to go.

Along with the SMS forwarding, Continuity will bring a number of other features to iOS 8 and Yosemite users. An example include Handoff, which will allow users to start an email on their iOS device and finish it on a Mac. It will also be available for other apps like Mail, Safari, Pages, Numbers, Keynote, Maps, Messages, Reminders, Calendars, and Contacts.

If an iPhone is on the same Wi-Fi network as a computer, users will also be able to take a call directly from their Macs. 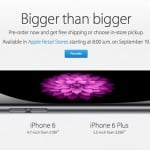 AT&T plans on supporting Wi-Fi calling next year
Nothing found :(
Try something else