The “iWatch” is expected to take center stage at next week’s “iPhone 6” event. Regardless, the wearable device isn’t expected to launch in stores until 2015. What will Apple’s first smart watch look like? KGI Securities’ Ming-Chi Kuo believes he has an idea.

As first reported by AppleInsider, the analyst on Thursday told investors the iWatch may have a rectangular design and will include 8GB of internal storage with 512MB LPDDR3.

Additionally, the wearable device will be available in two screen sizes: 1.3-inches and 1.5-inches. For further customization, the device could arrive in two to four different casing materials, including aluminum and gold.

The fact that wearable devices don’t need much memory explains our prediction of an 8GB version with 512MB built-in memory. We expect casing material to be of 2-4 different types, with aluminum the most likely as it has been widely used in Apple products. A gold casing option is also possible, to add a luxury image to the product. We believe iWatch will be rectangular in front/ panel side shape. And lastly, like some other wearable devices, we expect there to be a number of holes on the back side of the device that can be used to monitor users’ vital health signs such as heart rate.

Finally, Kuo says that “both software and hardware design challenges” have forced Apple to delay the launch of the iWatch until next year.

Apple is expected to unveil the “iPhone 6″ and “iWatch” on Tuesday, Sept. 9 at an event at the Flint Center in Cupertino, California. The media event begins at 10 a.m. PDT. 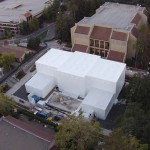 A new aerial shot suggests that Apple is planning something extraordinary next week
Nothing found :(
Try something else