It looks like all of those folks buying new iPhones last week in the United States for the Chinese black market will soon be out of luck. CNBC is reporting that final approval would be “completed soon” by Chinese regulators to bring the iPhone 6 and iPhone 6 Plus to the world’s largest consumer market.

Just last week, a Chinese report said that the new iPhones wouldn’t be arriving in China until 2015 after Apple failed to reach an agreement with the Ministry of Industry and Information Technology. This led initial prices for the phones on the Chinese black market to hit $1,900 for the iPhone 6, and $3,250 for an iPhone 6 Plus.

The news that approval for the phones is now imminent has caused the prices to drop significantly, as this clip shows:

CNBC notes that Chinese smugglers have been able to get past U.S. Customs officials by putting iPhones in coffee tins, toothpaste boxes, and the equivalent of Twinkie boxes.

In a video best described as disturbing, you can see countless smugglers buying the new phones in New York City last week: 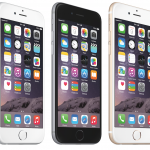 Adoption rate for iOS 8 continues to rise
Nothing found :(
Try something else