We know that the entry-level Apple Watch will set us back $349. Beyond this, little is known about the wearable device’s pricing levels or costs.

A new report from NPD DisplaySearch sheds some light on the probable cost of the Apple Watch’s flexible AMOLED display screen. The market research firm says that the display on the 1.5-inch diagonal 42-millmeter Apple Watch costs $27.41 per unit. Of this, just $7.86 comes from the display itself. The rest is for the device’s cover glass.

Last week, IHS said that the 4.7-inch display found on the iPhone 6 costs $45, while the one on the 5.5-inch iPhone 6 Plus is $52.50. In other words, the smaller screen on the Apple Watch costs more to produce.

According to Charles Annis, vice president of manufacturing research at NPD DisplaySearch, this could be temporary:

While current costs for the flexible AMOLED display are high, costs are forecast to decline as yield rates improve … Apple’s choice of a plastic AMOLED as the display medium for its Watch reflects not only on its strategy of emphasizing quality, but also suggests increasing confidence in flexible displays as an enabling technology for wearable computers.”

The Apple Watch is expected to launch in “early 2015.” The device’s cover will feature either Ion-x or sapphire glass, depending on the model.

See also: Apple CEO Tim Cook, other executives, profiled in an interesting new feature, Take a look at this concept video of the Apple Watch OS running on an iPhone 6, and You can now watch Apple’s full Sept. 9 keynote presentation on YouTube, 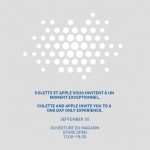 Fashion retailer Colette and Apple are planning a 'one day only experience' on Sept. 30