You are using an outdated browser. Please upgrade your browser to improve your experience.
by Bryan M. Wolfe
October 9, 2014

Activist investor Carl Icahn has published an open letter to Apple CEO Tim Cook requesting an increased stock buyback from the company. In the letter, Icahn praises Apple for its recently announced products, including the iPhone 6 and iPhone 6 Plus, Apple Pay, and the Apple Watch.

He also suggests that 2016 would be a great time for Apple to announce an UltraHD Apple TV set.

As we highlighted in our previous letter, we believe UltraHD’s (ultra-high-definition television) superior picture quality in comparison to regular HD will drive a major TV replacement cycle as the price gap between them narrows. It should also be noted that Reed Hastings, CEO of Netflix, has referenced UltraHD as a major catalyst for Netflix going forward, and while this is true for Netflix, we believe it is also true for Apple. Against the backdrop of this replacement cycle, FY 2016 represents an opportune time to introduce an UltraHD TV set.

Apple has long been rumored to be working on a television set, which many have dubbed the “iTV.”

In Walter Isaacson’s 2011 biography “Steve Jobs,” the late Apple co-founder is quoted as saying “i finally cracked it,” when referring to an “integrated television set.” Last December, Cook fanned the flames when he told NBC’s Brian Williams that the living room was ” an area of intense interest.”

In recent months, we have heard very little about the iTV as Apple has concentrated on adding content to the existing Apple TV.

I’m not a current Apple investor, but I do recognize that Apple could play a much bigger role in the living room than it currently does. Whether that increased role requires it to introduce a television set remains fuzzy, at best.

Low profit margins on televisions suggest that Apple would be wise to stay out of this market and instead concentrate on making the software on the Apple TV box better. Nonetheless, Apple has always been both a software and hardware company, which allows it to control the entire user experience. Apple’s DNA might make an iTV unavoidable. 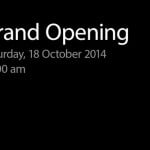 Apple to open new retail store along Princes Street in Edinburgh, Scotland, on Oct. 18
Nothing found :(
Try something else