You are using an outdated browser. Please upgrade your browser to improve your experience.
by Bryan M. Wolfe
October 22, 2014

As the first iPad Air 2 and iPad mini 3 units make their way to customers, the first reviews are in. Here is a sampling of what folks are saying about Apple’s new tablets around the Web:

The iPad Air 2 is thinner than its predecessor and while it’s only by a little bit, it does make a difference. The hardware design is slightly different and when combined with the thinness, the iPad Air 2 feels very comfortable to hold and use …

… It’s a small thing, I know, but it’s an annoying lack of consistency across the product lines. I almost feel like the Sleep button will become my new nemesis now that the iPad has Touch ID.

Overall, the new model reinforces my view that the iPad is the best full-sized tablet, but this latest iteration isn’t much of a leap …

The problem was this: I couldn’t tell the difference between the Air and Air 2 while doing these things. The new model didn’t seem faster or smoother while running all my apps, perhaps because — like most people — I don’t use my iPad for the most demanding video-editing apps or high-end games. It registered pretty much the same network speeds as my Air.

The new iPad Mini 3 really just gets two things: Touch ID and a gold case option. Really, that’s it. Everything else about it remains unchanged.

The iPad Air 2, though, is entirely new. It’s a thorough refresh, that not only makes it a nice year-over-year improvement over last year’s iPad Air in just about every single regard, but arguably positions it above the iPhones 6 as the top-tier iOS device, period.

Availability in Croatia, Greece, Puerto Rico, Russia, Turkey, United Arab Emirates, and elsewhere around the world, will continue through the end of October with additional global availability in the coming months.

See also: The iPad Air 2 does indeed sport 2GB of RAM along with a triple-core A8X processor, Op-Ed: What Apple should do about iPad sales, and If Apple was in the World Series, they just struck out with the iPad mini 3. 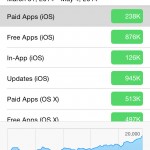