The head of the FBI isn’t happy that Apple and Google encrypt user data, thereby making it harder for law enforcement agencies to access. Director James Comey told CBS’ “60 Minutes” that the move places “people beyond the law.”

The notion that we would market devices that would allow someone to place themselves beyond the law, troubles me a lot. As a country, I don’t know why we would want to put people beyond the law …

… The notion that people have devices, again, that with court orders, based on a showing of probable cause in a case involving kidnapping or child exploitation or terrorism, we could never open that phone? My sense is that we’ve gone too far when we’ve gone there.

Last month, Apple CEO Tim Cook said that Apple has never worked with any government agency from any country to spy on its customers. “We have also never allowed access to our servers,” he said. “And we never will.” His comments came as Apple began implementing new measures to enhance user security and privacy, including two-step verification and app-specific passwords.

While I understand where Comey is coming from, I also don’t want to see Apple or Google become an arm of the government. Hopefully, Apple and Google stick to their guns on this one. 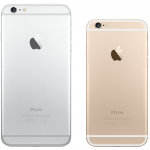 People are buying iPhone 6 and iPhone 6 Plus units in record numbers
Nothing found :(
Try something else