You are using an outdated browser. Please upgrade your browser to improve your experience.
That iThingy You're Wearing
by Joe White
April 27, 2015

I was one of the lucky few who got an Apple Watch in the mail on Friday, and I’ve been using the smartwatch non-stop since then. Here are my first impressions, limited to five main points, concerning Cupertino’s latest device.

Activate on Raise Wrist, the Watch OS feature which allows users of the smartwatch to bring the device’s display to life with a simple raise of the wrist, is a dream and works great. I’d been concerned before receiving the device that this feature might require a real jig of the arm in order to activate (dark memories of vigorously flicking the Pebble smartwatch in order to activate its backlight soon came to mind), but this isn’t the case. Instead, a simple tilt of the wrist is enough to switch the display from off to on, and better yet, tilting your wrist back the other way will see the screen dim to black. Welcome to the future.

Early reviews of the Apple Watch criticized Watch OS, highlighting its various quirks and oddities, and noted that the transition to using the operating system (when coming from the more refined iOS 8) was a bit of a drag. I’ve been pleasantly surprised with Watch OS, however: it’s easy enough to get used to, it feels logical and makes sense (to me, at least), and the combination of the Digital Crown, Force Touch, the friends button, and the touchscreen make it quick and easy to perform simple tasks using the smartwatch. For a 1.0 piece of software, this thing is good.

I ordered a 42 mm stainless steel Apple Watch with a white Sport Band, and had been worried that it’d be difficult to clip the band on and off when I jumped in the shower, washed the dishes, or played the piano. Honestly, nothing could be further from the truth. Apple includes instructions on attaching the detaching the Sport Band and, provided you follow these, the band itself really is easy to fasten. My advice? Be sure to clip the pin hole before pushing the exposed strap underneath the band. Plus, it’s a comfortable band that maintains good contact with the skin in order to ensure the Watch’s heartrate monitor works well. 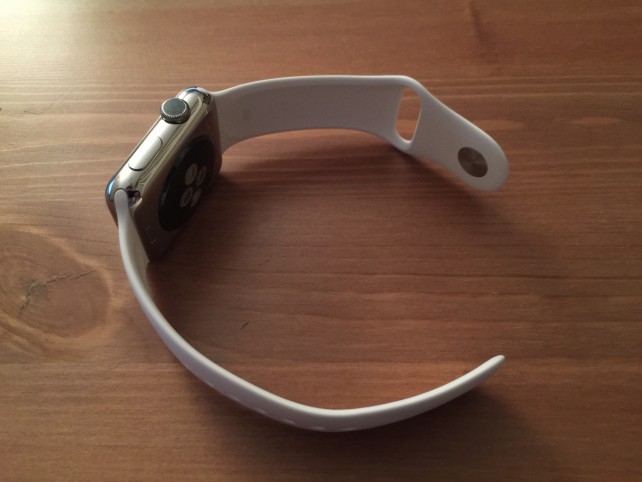 Forget the app screen: your Apple Watch’s watch face is the real Home screen for Cupertino’s smartwatch, and Complications are the reason for this. On my watch face, I’ve configured Complications to provide me with all the information I usually need. There’s one for the Activity app, another for the current temperature, one for my Watch’s current battery life, and a fourth one which provides a quick link to the Watch’s stopclock. Plus, if you choose the modular face, you can fit even more Complications onto your Watch’s screen; this, combined with Glances, means you’ll rarely need to return to the smartwatch’s app selection interface to launch one of your favorite watch apps.

Make no mistake – when Apple promises “all day battery life” for its Watch, the company means it. I’ve been using the smartwatch frequently, with Siri commands and haptic notifications coming in thick and fast, and each day I’ve been left with a strong 20-odd percent of battery life. On several days, I’ve even gone for a workout using the Watch, too. Since there are no benefits to wearing the device overnight (apart from the possibility of a Taptic alarm in the morning), charging the smartwatch each night isn’t a problem, either. The inductive charger is incredibly easy to use, and it compliments the Apple Watch perfectly.

So far, I’m loving my Apple Watch. Sure, it isn’t perfect (there’ll be more on this tomorrow), but it’s nevertheless a powerful device that feels great to wear and is a real joy to use. 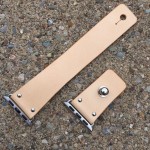