You are using an outdated browser. Please upgrade your browser to improve your experience.
Accessories
by Brent Dirks
May 18, 2015

Even though the Apple Watch has only been on the market for a little more than three weeks, charging stands are quickly turning into a must-have accessory. While the watch’s inductive charging system is simple, a stand makes it that much easier to dock and charge the device. A stand also helps protect the watch from scratches, drops, and other hazards.

A number of accessory manufacturers have already announced their take on a stand, but actually purchasing one has been a bit difficult. Many options are still in the preorder stage and aren’t scheduled to ship to buyers until later this month or sometime in June. But fortunately, Griffin is bucking that trend with its new WatchStand.

Available to order since late April, the stand is one of the most inexpensive on the market at just $29.99. You’ll obviously need to provide the Apple Watch charging cable, but getting set up is pretty easy. The top of the post captures the magnetic charging disc, so all you’ll need to do is place the watch on it, and charging will begin. 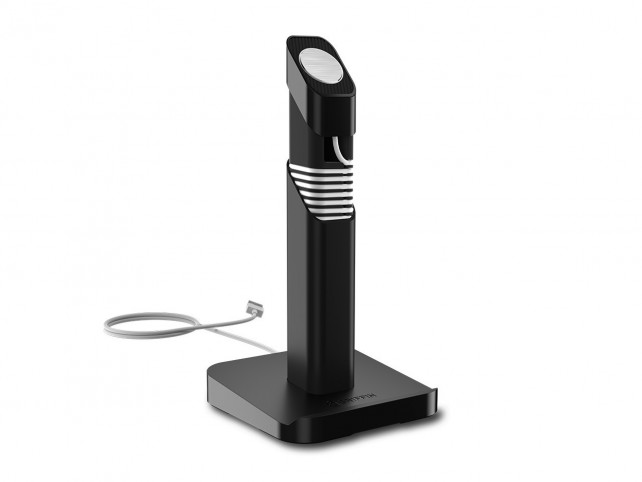 The extra charging cord can be safely and securely stored inside of the stand’s base.

My one complaint with the product was the process to store extra cable inside the stand’s post. While there is a molded path for the cable, it took me a few times to get the cord wrapped up tight enough so the post could fit back into the stand.

Once you do that, you’ll be able to charge the watch in both a landscape position with the band closed or horizontally with the band open.

As a great bonus, the base of the stand is molded to allow users to place any size of iPhone in an angled landscape position. It was a perfect fit for my large iPhone 6 Plus, and charging both devices in one place makes a lot of sense. 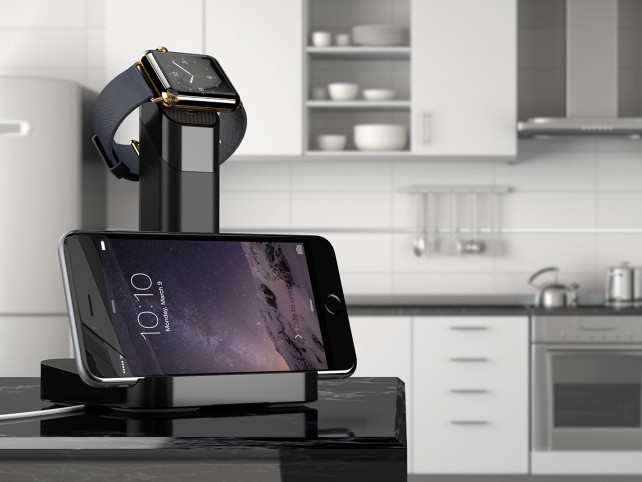 The stand can even hold an iPhone 6 Plus in a nice angled position.

Along with being weighted, the stand’s base features non-slip material that should help it stay in one place on a desk or nightstand.

While not made with premium materials like other more expensive options, I’ve been really impressed with Griffin’s WatchStand. The mix of nice features and a low price point makes it a winner and highly recommended.