You are using an outdated browser. Please upgrade your browser to improve your experience.
Accessories
by Jeff Byrnes
June 1, 2015

The legal disputes between BlackBerry Ltd. and Typo Products LLC have come to an end in a settlement, according to a report in The Wall Street Journal. The lawsuit, in which BlackBerry alleged that Typo infringed on its iconic keyboard, has been settled with an agreement that Typo will permanently stop selling keyboards for devices with a screen size of less than 7.9 inches.

BlackBerry’s share of the global smartphone market has dropped like a rock in recent years, and the Canadian company is hoping its new Leap and other upcoming devices aimed at professionals make the name relevant again, generating sufficient revenue to tide it over until sales of new mobile management and security software gain traction with enterprise customers.

The BlackBerry smartphone is one of the few phones to still sport a physical keyboard, but the new Leap lacks one and the settlement seems to suggest that the company has no plans to adapt its keyboard to devices with screen sizes of 7.9 inches or more. As a result, Typo is still free to market its keyboard case for the iPad Air and iPad mini.

The AppAdvice week in review: Is the Apple Watch doomed? 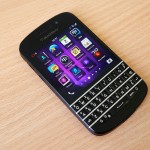 Apple competitor Samsung is reportedly in talks to buy BlackBerry for $7.5 billion
Nothing found :(
Try something else