You are using an outdated browser. Please upgrade your browser to improve your experience.
Connected Car
by Joe White
August 14, 2015

Apple has conquered the phone, tablet, watch, and music streaming space. Next on the agenda? Car HUDs, if one tech analyst has it right.

According to Chip Chowdhry (speaking with The Washington Post), Apple is “very likely” to be developing a huge 27- to 50-inch HUD (heads-up display) that borrows from fighter jet technology in order to improve the traditional driving experience. These HUDs, the publication posits, would use gestures and sensors attached to the car’s windshield. Moreover, they’re reportedly about to go into production.

Don’t expect the launch of an Apple HUD to come any time soon, however. Chowdhry noted that this “does not seem imminent,” but that it could happen, further down the line. He also suggested that the HUD could, in fact, be used in a completely different device, like an Apple-made television.

Of course, we’ve heard a lot about the possibility of an Apple Car in the past. As we’ve said before, something car-related definitely seems to be going on at Cupertino; Apple has hired several car experts in recent months, and several employees already with the company have reportedly been reassigned to a car-related project.

In May, Apple executive Jeff Williams called cars the “ultimate mobile device,” and we all know how interested Apple is in mobile devices. A car HUD from Apple, however, wouldn’t be a revolutionary device, as other companies are already at work on similar products. The Washington Post added:

BMW, Hyundai and Volvo presented windshield displays that would show drivers their now-playing music, give “speed warnings” if they were going too fast and even flash alerts if the car sensed a potential crash.

Some displays are already on the market. GPS maker Garmin sells a $105 dashboard-mounted display that beams out directions. And Navdy, a San Francisco startup, sells a $299 display that has been called “Google Glass for your car”: It’s a gesture-controlled, voice-activated projector that blasts out directions, texts, and Facebook and Twitter notifications at 40 times the brightness of an iPhone.

Naturally, however, a possible Apple car HUD would better all existing products in ways which remain to be seen. That is, if Apple is indeed using this technology for a car HUD. Which it may not be.

Gosh! We’ll keep you updated with more information as we receive it. 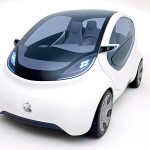 Steve Wozniak wants Apple to challenge Tesla
Nothing found :(
Try something else