You are using an outdated browser. Please upgrade your browser to improve your experience.
Apple Water Cooler
by Brent Dirks
August 20, 2015

Poor Swatch. Instead of welcoming Apple to the party, the famous Swiss watchmaker seems to be more intent on acting like a whiny 4-year-old.

As first noticed by Patently Apple, the company has filed to trademark the phrase “One more thing” in Europe. Yes, the same phrase made famous by Apple’s co-founder and late CEO Steve Jobs during special product introduction keynotes.

The application was originally approved and registered in May. The complete information can be found here. Swatch will apparently hold the trademark until 2025.

Even though the phrase gained some notoriety being uttered by Peter Faulk’s “Columbo,” Jobs used it at the end of his famous keynotes to introduce special new Apple products or features. Some examples include the introduction of FaceTime in 2010 and iTunes Match at WWDC 2011.

Current CEO Tim Cook has mostly avoided the phrase during keynotes, but he did use it to introduce the Apple Watch back in September 2014 and Apple Music at WWDC in June.

It’s unknown exactly what Swatch plans to do with the trademark, but more than likely it was simply done out of spite. 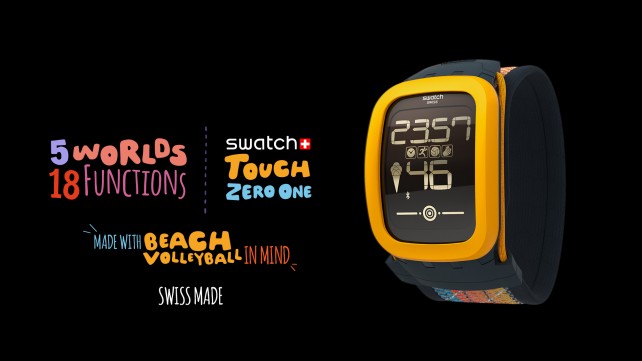 Swatch’s “answer” to the Apple Watch is designed for just beach volleyball players.

You’re probably not aware that the company unveiled its own “smartwatch,” the Touch Zero One, that’s designed specifically for beach volleyball players. So there’s not exactly a large base of possible buyers out there.

Maybe Swatch should focus on its strong suit – namely watches – instead of coming up with digs that won’t exactly do much to hurt Apple.

For other news today, see: Supply chains support ‘iPad Pro’ September production start, Samsung teases us some more with a Gear S2 video, and There is no faster way to record video than with FastCap.

Fossil jumps head first into the smartwatch game with a line of new products
Nothing found :(
Try something else