You are using an outdated browser. Please upgrade your browser to improve your experience.
Connected Home
by Joe White
October 29, 2015

Those who ordered an Apple TV soon after the fourth-generation set-top box became available online are in for a treat. And that's a treat, we might stress, and not a trick. Because the Apple TV 4 is now shipping for many customers, and is due to reach doorsteps for Oct. 30. As such, you'll be able to load up a scary movie on your new device in time for Halloween.

So far, the reports, which reached us from MacRumors, note that customers in Australia had received notifications explaining that their brand new Apple TV 4 would reach them on Oct. 30. Of course, since Australia is ahead of the Apple TV's other launch countries (including the United States and the United Kingdom), we can expect similar reports to surface from around the world as Oct. 29 rolls around.

As we explained recently, the new Apple TV is available to preorder from Best Buy in the United States, and it's due for delivery for these customers from Nov. 4. Much like Apple's prices for the set-top box, the Apple TV 4 is available for $149.99 and $199.99 for the 32GB and 64GB models, respectively (check out our article, if you're unsure which model's right for you). You can also pick up an optional two-year AppleCare Protection Plan for the new device for $29. Though, if you have an Apple Retail Store nearby, the latest reports claim that the Apple TV 4 will be available to purchase from Cupertino's brick-and-mortar locations from Friday.

The biggest addition to the device is true App Store support. Thanks to the new tvOS, you’ll able to download apps for the device.

The bottom line, then? If you ordered an Apple TV 4, it could be that the device is set to reach you for Oct. 30. Happy Halloween, indeed!

5 great accessories you need for the new Apple TV 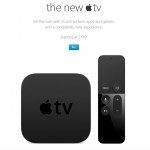 The new Apple TV will reportedly arrive at Apple Stores on Friday
Nothing found :(
Try something else