You are using an outdated browser. Please upgrade your browser to improve your experience.
Music
by Brent Dirks
November 19, 2015

We’ve got some bad news if you’re expecting to hear Adele’s new album “25” on Apple Music or any other streaming service like Spotify.

According to The New York Times, the album – which will officially arrive tomorrow –  won’t be available to stream:

With less than 24 hours before the album’s release on Friday, the major digital services have been told that “25” will not be made available for streaming, according to three people with direct knowledge of the plans for the release. The album is being released by Columbia Records in the United States, and by an independent, XL Recordings, in Europe and most of the rest of the world.

The publication said that Adele herself was personally involved in the decision to not allow the album on streaming services, at least for now.

Interestingly, Apple has been heavily promoting the album. As you can see, the artist recently sat down with Zane Lowe for an interview on Apple’s Beats 1 Radio.

Industry experts believe “25” will sell more than 2.5 million copies during its first week, which would make it the best selling CD in 15 years.

For now, you can preorder the album through iTunes for $10.99. 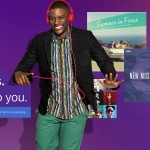 Apple set to play Beats Music out on Nov. 30
Nothing found :(
Try something else