You are using an outdated browser. Please upgrade your browser to improve your experience.
Apple's Software
by Joe White
November 18, 2015

Provided you’re a registered developer, you can download the update now on your device. Though, as of this writing, at least, we’re unsure what tvOS 9.1 beta 3 brings to the platform. There is, of course, Siri support for Apple Music: a much appreciated change that arrived in the initial tvOS 9.1 beta. Beyond this, bug fixes and performance improvements are expected to have been made in the beta.

Of course, we’ll let you know if any new features are discovered.

So far in iOS 9.2, on the other hand, Apple has improved the Safari View Controller, making enhancements to this aspect of the mobile OS. As we explained earlier today, Siri support has also been added for Arabic. It’s unknown when both iOS 9.2 or tvOS 9.1 will be released to the general public. 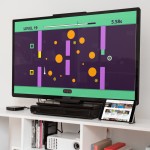