You are using an outdated browser. Please upgrade your browser to improve your experience.
That iThingy You're Wearing
by Joe White
November 3, 2015

You might have thought the Apple Watch, with its comprehensive activity-monitoring functionality, could have stolen sales from some of the market’s most popular activity trackers (namely, Fitbit and Jawbone). But, according to Fitbit’s third-quarter earnings report, nothing could be further from the truth.

According to the report (via the Guardian), Fitbit’s revenue is up 168 percent year-on-year, demonstrating the sustained consumer interest in its range of activity monitors. It seems, then, that Cupertino’s Apple Watch hasn’t caused Fitbit’s revenue to decline; instead, the market leader is continuing to see increases in its yearly takings.

Fitbit’s third-quarter results demonstrated the continued rapid growth of the Fitbit platform and our team’s ability to execute on the tremendous opportunity we see globally, as we help people reach their health and fitness goals.

Moreover, when asked specifically about the Apple Watch, Park went on to add that the device has had "no material impact" on Fitbit’s sales. The devices, according to Park, represent "two very different segments of the market," due to the user experience and, of course, the differing price points.

Here in England, I’m seeing huge, growing interest in Fitbit among folks with an interest in personal health. The amount of people I see with a Fitbit activity monitor on their wrist is climbing. Perhaps more significant, these Fitbit owners are talking about how much they love the product. When asked about the prospect of an Apple Watch, such a purchase often hasn’t crossed their minds.

In fact, I’m not sure many of the people I speak to about Fitbit and Apple are even aware that the Watch functions as an activity tracker.

So, is this a problem with Apple’s marketing? Perhaps. But, with a device this new (after all, we’re only six months in), it’s natural that the general, non-fanboy consumer isn’t going to see the Apple Watch as being a health and fitness device. To them, Cupertino’s wearable is just a shrunken down iPhone which you strap to your wrist.

It’ll be interesting to see how Fitbit’s revenue continues to grow over the next few years. As Apple further bolsters its Watch (while potentially lowering its price point) the playing field between the two products could be further levelled.

Already, the Apple Watch is the world’s No. 2 wearable. How long might it be until the product closes in on the No. 1 position? We’ll have to wait to find out. 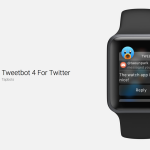