You are using an outdated browser. Please upgrade your browser to improve your experience.
Pocket Gaming
by Joe White
November 29, 2015

Dandara, an in-development game for Apple’s iOS, is a high octane, pixelated title that situates players in a world without gravity, according to a recent article.

Gravity? It’s a thing of the past

News concerning the upcoming release reached us from PocketGamer, which explains in its piece that Dandara is “a hectic action platformer” that features “puzzles, combat, and an open world to explore.” Based on what we’ve seen of the game so far, Dandara looks great, featuring an unusual control system that’s all about the zero gravity experience. PocketGamer adds:

Wielding both a fancy scarf and powerful projectiles, you’ll explore an world of monsters and puzzles by sling-shotting between walls, floors, and ceilings.

Indeed, gamers in Dandara use a combination of bullets (fired from a handheld weapon) and a green sling-shot mode of travelling between walls, ceilings, and the ground (though, as you can probably imagine, it’s sometimes difficult to tell which way is up and which is down). 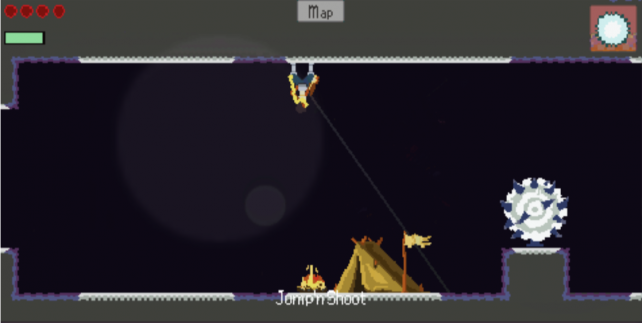 Upside down could be the right way up in this interesting application.

There are panels which users can hitch a ride on in order to cross boundaries in Dandara, and the aim in each level is to reach a doorway which sees players move on to the next round of action.

Finally, items in the game, including weapons, can be upgraded as players progress through Dandara’s many, many levels. PocketGamer adds: “The developers are designing the game with touch controls in mind, eschewing on-screen buttons for its touch-friendly movement and combat.”

Unfortunately, no firm release date for the title has been announced; Dandara is, at present, a work in progress, though we’ll of course let you know once more information becomes available. Here’s hoping we see a release at some point in the near future, because Dandara is definitely an iOS game worth looking out for.