You are using an outdated browser. Please upgrade your browser to improve your experience.
That iThingy You're Wearing
by Joe White
November 26, 2015

Apple Watch owners glance at their Apple Watch around four to five times an hour, averaging between 60 to 80 times per day, according to a recent study.

Two studies, both alike in dignity

Wristly.com (via Fortune) has the details, based on weekly surveys from 2,400 owners of Cupertino’s wearable device. These quick-fire “glances” don’t even see users take a close look at, well, Glances. Instead, the report explains that owners of the Apple Watch are rather checking the time, reading notifications on the fly, or even gleaning information from a complication on their watch face.

Though a separate study, from Stockholm University, looked at a smaller sample group (of just 12 participants; seven women, and five men), it nevertheless produced equally interesting results. In this survey, video footage was used to record owners’ use of the Apple Watch, rather than relying on responses from members of the study. And what staff at Stockholm University found was that brief interactions were indeed the most common, and that longer uses were far, far rarer.

Take a look at the breakdown: 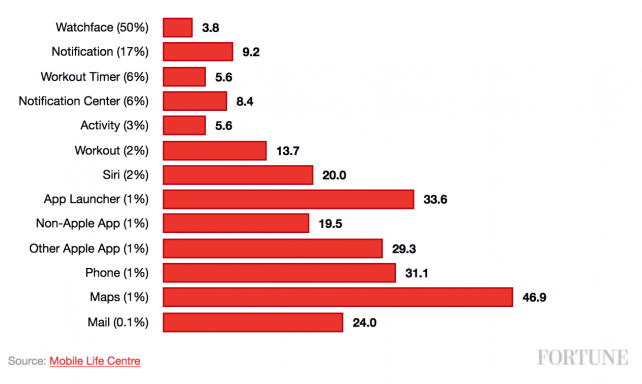 In fact, throughout an entire month, the Apple Watch in Stockholm’s experiment was used to take phone calls “only eight times and to read mail only twice,” Fortune adds.

Is this how you use the Apple Watch?

I am surprise with the data regarding Mail app usage, however. Perhaps it’s because I’m working a profession that doesn’t see me chained to my Mac (and, in turn, to my email client of choice), but I nevertheless check on email using my Apple Watch multiple times a day, rather than a couple of times a month.

Is this how you use the Apple Watch?

Blink and you’ll miss it

The bottom line, however, is still sound: The Apple Watch is and continues to be a device people use for short spells, rather than for any great length of time. And of course, herein lies the liberation of owning an Apple Watch. Because through glancing at notifications and information as it comes in, users will find that they’re no longer chained to their iPhones or iPads (let alone their Macs).

It’s a great device, and I’m really enjoying using it. 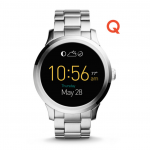 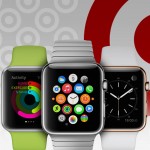 Target is now offering a $100 gift card with any Apple Watch purchase
Nothing found :(
Try something else