You are using an outdated browser. Please upgrade your browser to improve your experience.
Accessories
by Joe White
December 8, 2015

Apple’s iPad Pro is being billed by Cupertino and critics alike as a true device for professionals from any industry — writers, animators, and photographers included. To better serve professionals (and casual users), Apple has launched a brand new product for its iPad Pro: a Lightning to SD Card Camera Reader capable of transferring data at USB 3.0 speeds.

That’s now changed, however, at least for SD card users. The new product, which customers can pick up for just $29.99 from Apple retail stores (or from Apple’s website), brings USB 3.0 transfer speeds to the device. This means you’ll be able to transfer images and video up to 10 times faster than you could previously. Given the iPad Pro’s support for multi-stream 4K editing, this SD Card Reader will be a lot of use for some owners of the device.

Though Apple offered an SD Card Reader for the iPad previously, the model number for this accessory indicates that the USB 3.0-compatible reader is indeed a brand new device. You can order the $29.99 SD reader now from Apple’s website, and it’s currently shipping in three to five business days. 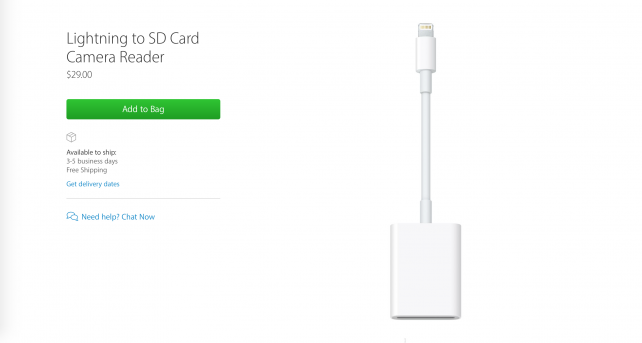 Aside from the Lightning to SD Card Camera Reader, iPad Pro owners are going to be interested in picking up an Apple Pencil and Apple’s Smart Keyboard, both of which are billed as must-have accessories for the 12.9-inch tablet.