You are using an outdated browser. Please upgrade your browser to improve your experience.
Apple's Software
by Joe White
December 16, 2015

The move means folks who live or work in Los Angeles can now access public transit data from inside of the Maps application in iOS 9. The data is also available for access inside of El Capitan, which launched on the Mac App Store a few months ago.

Public transit support sees information on train, light rail, and bus services appear inside of the Maps app when users seek out directions for a route. Travel time is also estimated in this interface, allowing users to directly compare how long walking, driving, or public transport will take in order to get from A to B.

So far, only a handful of cities have received support for public transit in the Maps app. When the service first launched, London, Berlin, New York City, and Beijing were among the cities which supported the feature. Since then, however, public transit support has rolled out to a number of further locations, including Boston and Sydney.

You can check on a list of supported cities at Apple’s Maps: Transit feature page by clicking this link. We’ve also included a list below:

Several cities in China also support the feature, too.

Have you tested public transit for the Maps app in iOS 9? At the minute, I’m still waiting for support for Manchester, England to reach the service. Something tells me I could have a while to wait. 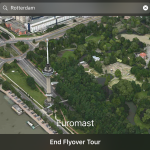 You can now flyover Rotterdam, Budapest and more in Maps
Nothing found :(
Try something else