You are using an outdated browser. Please upgrade your browser to improve your experience.
App-dicted
by Jeff Byrnes
December 14, 2015

Several years ago, social media giant Facebook launched photo synchronization to back up and upload your pictures to your account. If you’ve been using that service, you should probably know that Facebook will soon be discontinuing it. In a move as bold as when Facebook ripped out Messenger capability within its main app last year, the social media outlet is killing off photo synchronization in favor of its new Moments app.

You’ve got less than a month

As of Jan. 10, 2016, Facebook will shutter the photo synchronization service. You’ll still be able to access all of your photos, either through Facebook or via the Moments app, but you will no longer have the convenience of new pictures automatically uploading to Facebook without installing the second app. 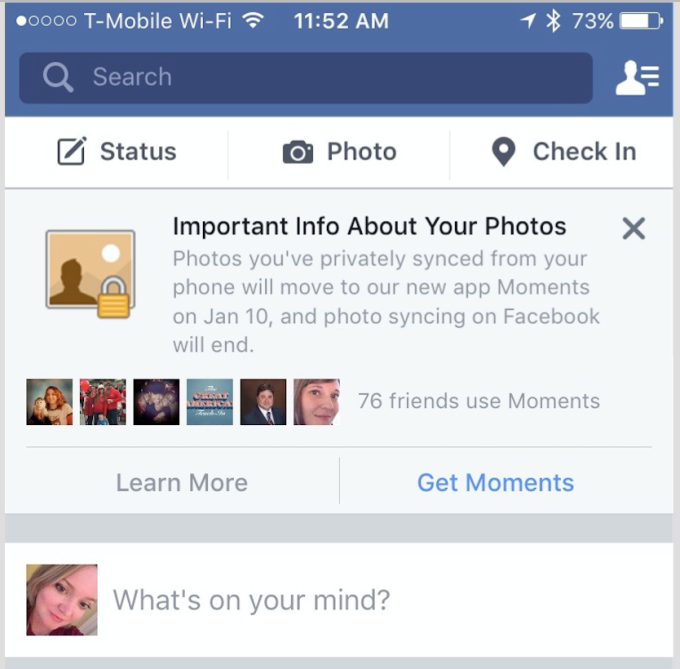 What are your options?

If you move to Moments, the photos you’ve previously synchronized to Facebook will still be there in the app. If you don’t want to install Moments, you’ll be given the chance to download a compressed file with all of your photos on your computer, or you can delete them through your Facebook profile.

Facebook is always on the cutting edge, trying out new ideas. There was some turmoil when the messaging functionality was removed from the Facebook app, and there’s bound to be the same level of complaining about this move. The company watches carefully what’s happening in the app ecosystem, and hopefully knows what it’s doing in this regard. If you’re affected, you can download Moments for free on the App Store.

Moments – Get the photos you didn't take
Facebook, Inc.
Free

Facebook is bringing offline comments and improved feeds
Nothing found :(
Try something else