You are using an outdated browser. Please upgrade your browser to improve your experience.
tvOS App Store
by Joe White
December 23, 2015

Littlstar, a free application for iOS and the Apple TV, is a smart piece of software that uses 360-degree video capture to add a sense of realism to the content it offers.

As if you were there

The app isn’t new; it first launched some 10 months ago, but it has more recently received an update for Apple’s fourth-generation Apple TV. As 9to5mac explains, the application aims to put a virtual reality spin on Cupertino’s set-top box without requiring customers to cough up for extra accessories, like headsets.

Littlstar does this through allowing Apple TV owners to control the direction they’re looking in using the Siri Remote’s touchscreen trackpad. You can, for instance, view a ballet performance in the application, and as 9to5mac notes, users can use the Siri Remote to look around at the audience, as well as at the stage. The experience seems to be quite something, offering Apple TV owners a new means of interacting with the content they are watching, and helping viewers more than ever feel like they’re engaging with something live, rather than a recording. 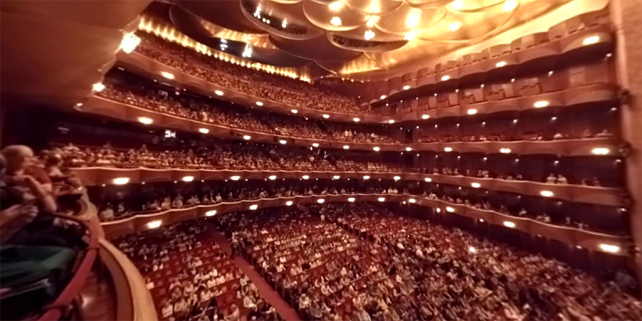 Watching a ballet performance in Littlstar.

Using both touch panning and the movement of your phone, you can experience 360 video content in the palm of your hand without any VR headset, and even pop in to VR mode at the touch of a button to slide your phone into tray-based headsets like Google Cardboard.

As a television system, this is the kind of thing we should be seeing happen with the tvOS platform: developers adopting Apple’s hardware (and software), and creating new experiences for users to enjoy. The experience on offer in Littlstar looks great, and I can’t wait to try it out.

Perhaps the best thing about the app, however, is that it’s backed by Disney Accelerator, “which provides both financial backing and mentoring for tech companies launching products in the consumer entertainment and media fields,” 9to5mac adds. Moreover, there are apparently thousands of videos from Discovery, Disney, MLB, and National Geographic (among others) in Littlstar’s library, ready and waiting for viewers to watch and interact with.

Features made available in the application include:

You can download the free Littlstar now on the App Store; as mentioned, it’s optimized for the iPhone/iPod touch, iPad, and for the Apple TV, too.