You are using an outdated browser. Please upgrade your browser to improve your experience.
Music
by Brent Dirks
January 8, 2016

With the next-generation iPhone likely to be without a standard 3.5mm headphone jack, Apple is moving head first into a wireless world. According to a new report from 9to5Mac, the company is developing a pair of Beats-branded completely wireless earphones that could be introduced right along with the “iPhone 7” sometime this fall.

The earphones won’t even have a cord connecting the left and right buds. Here’s more from the report:

It’s expected that the in-development accessory will include a noise-cancelling microphone system, enabling phone calls and communication with Siri even without Apple’s prior in-line microphone and remote. In order to fit inside of the user’s ear, Apple will likely develop different sized ear sleeves for the hardware, similar to the approach used by Motorola and Bragi. Bragi’s headphones include a built-in button to answer calls, so Apple’s could have a control for managing calls and activating Siri.

And just like the pictured Bragi device, the report said that the earbuds won’t have a micro-USB or Lightning port for charging:

The latest version of the new wireless Apple/Beats headphones in development do not include any ports for charging, in contrast to the mini-USB port on the current wireless Beats. Instead, the new headphones are likely to come with a carrying case that doubles as a rechargeable battery to juice up the headphones when they are not in use. Apple first tested the battery case waters last month with an iPhone 6 battery case. While Apple hopes to launch the new earphones this fall, the hardware is still in development and could be delayed by battery life concerns. As the design requires twin wireless chips and separate batteries, sub-4-hour battery life without use of the case would be expected.

The headphones will be a high-end alternative to any new EarPods included with the new iPhone. That means they will be sold separately.

Even though it will probably be nine months or more before the handsets officially hit the market, the rumor mill has already been churning about the “iPhone 7” and “iPhone 7 Plus.”

Reports have also indicated that the devices will be both dustproof and waterproof. The larger “iPhone 7 Plus” might also be offered in a 256GB storage option – double the current 128GB edition. Other recent rumors have detailed an improved 3D Touch sensor, and dual rear cameras for optical zoom. 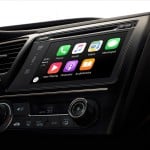 Apple asks Volkswagen to not showcase wireless CarPlay at CES