You are using an outdated browser. Please upgrade your browser to improve your experience.
Pocket Gaming
by Aldrin Calimlim
January 12, 2016

Electronic Arts has just enhanced not one, but two of its popular mobile racing games, both of which happen to be developed by Firemonkeys, with new updates for the new year. The two games in question are Need for Speed: No Limits, the latest mobile title in the Need for Speed franchise of white-knuckle action racing games, and Real Racing 3, the latest installment in the Real Racing series of racing games featuring vehicles inspired by real cars and gameplay with real players.

Feed your need for speed

More significantly, Need for Speed: No Limits has just been updated with a new competition along with a couple of other enhancements.

The new competition arrives in the form of Tuner Trials. Now playable in Blackridge, Tuner Trials give you the chance to collect materials specific to certain car parts and conversion kits to upgrade your parts into higher-level variants. Each day brings a different type of material, as outlined below:

In case you need a specific type of material that isn't offered on the current day, you can get an all-access pass to unlock all events.

The latest update to Need for Speed: No Limits also introduces a new tournament car in the form of the Dodge Charger R/T 1969, which is now available exclusively in the tournament store. It also brings bonus gold for first-time purchases.

Rev up for real racing

As for Real Racing 3, it has just been updated with the addition of a couple of new cars and the introduction of the next two seasons of Gauntlet.

Joining Real Racing 3's roster of realistic virtual vehicles are the Ford Shelby GT350R and the 2015 Mustang GT. The former is up for grabs in Track Day Domination, while the latter is offered as the ultimate reward in Gauntlet Season 2.

Gauntlet Season 3 is also on its way to reward racing champs with awards and the 2015 Porsche 911 RSR.

The newly updated versions of Need for Speed: No Limits and Real Racing 3 are downloadable now from the App Store. Both are available as free-to-play games for iPhone, iPod touch, and iPad. 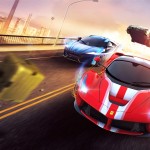 Get ready for a holiday rush in Gameloft's Asphalt 8: Airborne
Nothing found :(
Try something else